A bit of an odd one, I'm not sure if it's a bug or something else and I've not found anyone with the same issue.

Some of my nicely scrapped comics are only displaying the comic story title instead of Series Name and Number (Year). 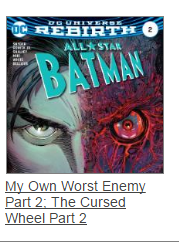 Is there anyway to change/toggle this as i would prefer the "Series Name #Number (Year)" as the story title can be very long sometimes and sometimes just looks bad.

0
Under review
Tom 6 years ago

Ubooquity displays the title from the "ComicInfo.xml" metadata file found in your comic book archive.

If it doesn't find this metadata file, it just uses the filename.

Series name and number are not used (yet) to generate the name of the comic, so my guess is that comics displayed correctly don't contain metadata at all.

I have plans to allow more customization of the displayed name, but they have not reached the top of the todo list yet.

I was able to work around it by removing the Title data through Comicrack and updating the metadata. Seems to have done the trick.